A Prayer for Harvey Milk Day, Every May 22nd

Eternal One, You created us b’tzelem Elohim , in Your image, filling us – as You are filled --- with hope, hope that we might yet bring to fruition Your vision of cooperation and harmony, of wholeness and peace. You imagined such a world, Holy One, and then instilled within us the ability to imagine it too. You hope even now for such a world, Holy One, knowing You created us with the desire to give each other hope like Yours, hope that tomorrow will find us finally ready, finally able, to bring Your imagined world into being. Blessed are You, Hopeful One, creator of hope and of those who bring it to the world.

This was a really cool day at my Church First Congregational (UCC) in Riverside - I got to tour the workings of our Austin pipe organ during our History day a couple weeks ago. I never imagined that I would actually get to go inside what amounts to the bellows while the organ was being played. 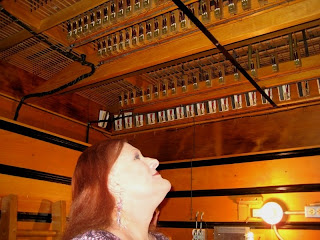 Here I am inside the "Austin Universal Air Chest."
John Austin filed an application for the patent of his "new" style of windchest design on April 4, 1893. He developed the idea of this new kind of chest in which all of the parts could be seen and repaired even while the organ was turned on and the mechanism was in operation.
The unit gets pressurized and as the organ keys are pressed the little solenoids open valves that let the air go out into the appropriate pipe. If you are inside it makes your ears pop when the pump starts, but it isn't painful or even loud when played. The pipe simply resonates with the air moving out of the chest through it and all you hear inside is just a soft whistling of air blowing out, but outside where the pipes are hold on to your hat! Because in the space where the pipes are mounted it is very loud and sounds awesome!! There are two of these Air Chests, one on each side of the chancel with different banks of pipes for different kinds of sounds.
Just for kicks, here is a link to the American Theatre Organ Societies internet radio station:
http://www.atos.org/radio/atos_radio-player.html
Hugs and Blessings,
Eva-Genevieve!
Posted by Eva-Genevieve! at 9:17 PM 1 comment:

A Letter to the Mother of a Young MtF

I just wrote this reply to the mother of a young (MtF) girl. She was having trouble using her daughters name and spoke of it in one of the groups I belong to.
"Hi [mom],
I was 51 when I came out to my mom - she was 81 at the time - and she had a lot of trouble with my new name but she tried and she cared and that is what is really important. For 51 years I was her son Evan and life long habits do not break easy of quickly. Sometimes as a child she called me Ev for short and so we agreed that it was still appropriate to call me that instead of Eva. After about a year she started addressing letters to me in my full new name and has started using Eva more often with me on the phone. This has taken about 4 years for her to change and she certainly has the right to go at her own pace. You do too [mom] - so don't beat yourself up if you slip up once in awhile.
To your daughter I urge patience. I know that it is easy for me at 55 to say and it is hard to be patient in your youth, but remember little sister: time is on your side!
Sometimes we trans folks get impatient about our families catching up and using our new names. We want them to instantly understand and fully grasp all of our changes and be happy for us. But we must always remember that though we knew from early on we were different and have always lived with the inner image of our true selves, to others our change seems sudden and drastic and often very disconcerting. We have to give them the space to adjust too. We have to be accepting of them as they are, slow to comprehend as they may be and let them act according to their own perceptions if we expect them to accept us our way too. It is a long process for them to understand us. We must nurture them into understanding just as we need and want their love and acceptance."
Hugs and Blessings,
Eva-Genevieve!
Posted by Eva-Genevieve! at 12:54 PM 2 comments: