Catching Up (almost) As Promised

Wow, suddenly, my life got very busy and only now am I able to start catching up from where I left off with last month. On Feb 27th representatives from the Transgender Law Center met with about 15-20 TG-folk and their allies from all over California’s Inland Empire and the High Desert area. The meeting was organized by Transgendered Soul (an I.E. TG support group) and was held at Redlands United Church of Christ. We discussed changing laws regarding name change and other areas of transition – including some of the problems I and others are having now that we are the new person on our driver’s license and still remain under the old identity with National level social services like Medicare. Thanks to the legacy of the Bush years and his goose-stepping puppet masters (like Cheney and Ashcroft) we are stuck with the confusion caused by the ill-planned Real ID act and other so called "security" measures. So things are more complicated for those that want to change their gender here than they used to be, but the Transgender Law Center in California is a great resource that is accessible on a personal level to help you navigate the system and to help you get on track again. Here are a few pictures from that event:

Then on March 4 at 7PM in Riverside we had a turnout of around 300 people for a candlelight vigil on the eve of the State Supreme Court’s opening of hearings on the validity of Prop 8. A relatively new group in the Inland Empire of which I am glad to be a part of tentatively called the “Inland Equality Steering Committee” organized this event. Since we are very new we have not formalized our name or logo or even a mission statement, but we are a very diverse group of representatives from the TLBG and ally community formed after the passing of Prop 8 and hopefully to bring greater awareness and cooperation throughout the inland LGBT community. I am expecting some very good things to start developing as a a result of the inter-community cooperation. This Vigil had great suport from people of faith too - the Pastor of the First Congregational Church in Riverside and many of the members turned out. Equal Rights, Marriage Equality and Faith are not mutually exclusive in Downtown Riverside! 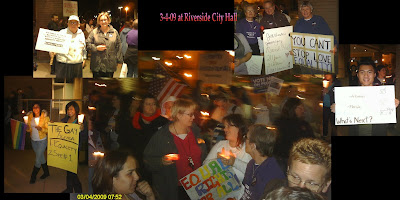 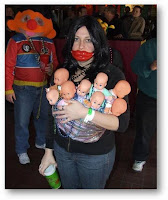 And one visual commentary on recent multiple births – this costume seen at Mardi Gras – need I say more?

I hope you all are doing well. Shortly (whatever that means) I will post about my week-long trip around the Southwest. There were some amazing things found in what I had thought to be the least likely places... Stay tuned.

Hey all,
Finally I have a couple hours at home and so here are some pictures and a video of the afternoon in Pasadena as promised. Thanks to the gals in the Los Angeles Exclusive Transgender & CrossDressers Group and to Randy DeTroit (http://www.cameramanforhire.net/) for being our personal Paparazzi for the outing.

And the video too:

This was a lot of fun - thanks for coming out and thanks for watching too!

Pictures of other stuff to come in another week or so.
Hugs and Blessings,
Eva-Genevieve!