I am commenting on this article in the Advocate - if you are not aware of the controversy please take a look this link for some backgound:
http://www.advocate.com/News/Daily_News/2010/04/22/Ticked_Off_Trannies_With_Knives_to_Alter_Marketing/
I haven't seen the movie and I probably won't (because I avoid movies that glorify violence and violent revenge taking), but I don't think a couple of asterisks solve the inherent problem. Any movie that glorifies violent revenge taking is a problem and the title, standing alone, reeks of violence and anger and revenge. We who have been the victims of violence and abuse need to be setting an example of being peaceable if we want to gain acceptance into the mainstream of society. An eye for an eye went out of style a long time ago. Fighting violence with violence resolves nothing and the violence only escalates when it is exploited in the media. Two asterisks just do not, in my opinion, counterbalance or negate the violence implied in the title nor do they disguise the fact the movie shows trans-folk as violent and vengeful. Hopefully we all try to avoid being defined by those terms. Hopefully we all seek to rise above the base, raw, emotion driven spirit of violent revenge. God knows I want to lash out at those that abuse and hurt us just as much as the next T-person but surely we can find a better way to combat the ignorance, bigotry and violence than by exploitative violence in films or even implied in a film title.
Hugs and Blessings,
Eva-Genevieve!
Posted by Eva-Genevieve! at 7:40 AM 2 comments:

An Awesome Video from the UCC

The Language of God from United Church of Christ on Vimeo.

Posted by Eva-Genevieve! at 8:24 AM No comments:

Here is a great interview with Jo Clifford a Transgender Playwright on BBC Scotland.

Greetings everyone,
I received Saturday night at Club Shine (Oxwood Inn - North Hollywood). The award is the first annual Bobbie Watts Memorial award and was presented to be by Laura Gonzales, the founder of TGCD.net and Club Shine. Bobbie was an awesome lady in the TG/CD community (as you can read below) who passed away very suddenly last year. I generally feel like I'm not doing enough - certainly nothing worthy of being awarded anyway - and said so prior to getting the award and here is the reply that set me back on my heels from one of the co-organizers of the LA CD/TG "Meetup" group (AKA Bobbie's Dreamers). Here is what was said about Bobbie and myself...

Nothing in this world gives me more honor and pleasure than to present to you the First Bobbie Watts Memorial Award to you for your commitment to the comunity, in uniting, encouraging, advocating and bringing new, young and older ppl to the community that is growing each day.Your heart is just as big as the person with who we honor in this award. As she opened not only her heart, her house, her space and at times her money to all those who needed something to drink , or food, a place to sleep, or a safe haven, and or just someone to feel accepted with, perhaps a place to be able to change and hang out with so they may/could feel comfortable in doing so. Someone who even tho at times felt she tried and many did not reach out to her and to the rest; she still insisted in trying to unite what perhaps could be imposible but she managed to do it to the few or many people she managed to unite throughout her last years of life!I present this award to you Eva-Genevieve as our first recipient because you are a corageous woman with a big heart that tries to unite all of our hearts, with you words of wisdom and encouraging each of us to come out and show the world who we are; that we should not be afraid of coming out and letting the world see... that we are humans after all! And that gender is not a thing between one's legs but between our ears! Eva it gives me so much joy & pleasure to present to you the 2010 first ever Bobbie Watts Memorial Award to you for your continuing Community outreach and in hopes that you continue to reach out to all of our community and unite us with other communities as well. Please accept this award on behalf of Bobbie, Laura and all of Bobbie's Dreamers for your hard work!" 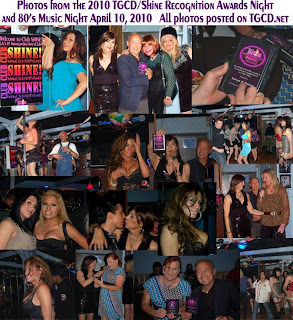 (That's me in the zig-zaggy blue dress)
I am blown away that people feel this way about me and I had tears in my eye as as I read the note. I am pleased and very humbled that I was chosen to receive the award given in her honor. What this shows is that being open about who one is - boldly at times - does make a difference in other people's lives. It is a behavior I encourage for everyone who has truly discovered their true self. If one lives openly as the person God created them to be, good will flow from that, so live your life to the full before God and the people around you!
Hugs and Blessings,
Eva-Genevieve!
Posted by Eva-Genevieve! at 9:09 PM 2 comments: