It Gets Better video

Here is today's article about the TDOR observance we held in Riverside yesterday afternoon. Aside from using the past tense word transgendered which bothers a lot of trans people it is a really good article (even if I do say so myself).

RODRIGO PENA/FREELANCE PHOTOGRAPHER
(From left front row) Bette (cq) Brown, of Riverside and Betsy Kohler, (cq) of Moreno Valley participate in a candle light memorial vigil during the 13th Annual International Transgender Day of Remembrance at First Congregational Church in Riversideon Sunday, Nov. 20, 2011. The service remembers those who were murdered for being themselves and hopes to promote understanding.
BY DAVID OLSON
STAFF WRITER
dolson@pe.com
Published: 20 November 2011 06:31 PM

Eva-Genevieve! Scarborough struggled most of her life with being transgendered and reconciling her sexual identity with her strong Christian faith.
On Sunday, Scarborough stood at the pulpit of First Congregational Church of Riverside, helping lead what is believed to be the first service in an Inland church honoring victims of anti-transgender violence.
At age 57, after more than two decades of attending churches that condemned her, Scarborough — who is taking surgical steps to transform her body from a biological male into a biological female — now sees her gender identity as a gift from God.
“God is more present in my life than ever before,” said the Riverside resident, who put an exclamation point in her name in praise to God.
“I know God is accepting of me and that he gave me the strength and heart to accept myself.”
Nearly 50 people attended the Transgender Day of Remembrance service at First Congregational, an illustration of how the church reaches out to transgendered people. Day of Remembrance events were scheduled throughout the world.
But First Congregational, part of the United Church of Christ, is in the minority. Most Christian denominations that have stated beliefs on transgenderism view sex-change surgery, hormone treatment and dressing in clothes identified with the opposite sex as sinful.
Transgendered refers to people whose gender identity differs from the biological sex they were born with.
Scarborough is a lay leader at First Congregational. She discovered the church after attending the non-denominational Safe Haven Community Christian Church, which rents a room at First Congregational and is led by a transgendered woman, the Rev. Renée Painter.
Painter, 61, said when she was looking for space for Safe Haven in 2006, she approached 27 churches. Only First Congregational welcomed her.
Painter tried to kill herself three times before finally accepting her identity as a female. A report this year by the National Center for Transgender Equality and the National Gay and Lesbian Task Force found that 41 percent of transgendered people have attempted suicide, compared to 1.6 percent of people overall, and that 26 percent had been physically assaulted because of their gender identity.
During Sunday’s service, Painter clutched a thick stack of papers with the names of more than 600 transgendered people who were murdered, committed suicide or died otherwise because of their gender identity. She often prays their names and on Sunday read some of them aloud.
“There is nothing redeeming in the story of their dying,” Painter said before the service. “There is only one thing redeeming here. They lived and they tried. And by reading this, they are remembered.”
Participants at one point read descriptions of murders of transgendered people from plastic-coated sheets of paper as they held lit candles in the cavernous church sanctuary, which was dark except for light from the overcast afternoon streaming through stained-glass windows.
Riverside Police Chief Sergio Diaz read one of the stories. Earlier in the service, Diaz acknowledged that, despite transgender-inclusive sensitivity training, some officers, through lack of familiarity with transgendered people, “unfortunately share the lack of understanding and biases as the rest of society.”
But Diaz said he was committed to ensuring that transgendered residents are treated equally and respectfully.
The Rev. Jane Quandt, pastor of First Congregational, said some Christian churches have oppressed transgendered people. She said before the service that she cannot see how people who embrace the identity God gave them are committing a sin.
“My faith is tied up in justice, and these are people who are persecuted,” she said. “They need to have a safe place to come and have a spiritually enriching life and be with people who accept them as who they are.”
Quandt said her conversations with transgendered members of her congregation gave her a stronger understanding of the emotional pain many endure.
“No one chooses to go through this unless they felt profoundly trapped in the body in which they were born,” she said. “I’ve come to appreciate the depth of their struggle and the amount of courage it takes to acknowledge this in themselves.”
Jeff Johnston is a gender issues analyst for CitizenLink, an affiliate of Colorado Springs-based Focus on the Family, one of the country’s largest conservative Christian organizations. He said transgendered people should be approached with “forgiveness and healing.”
But, he said, being transgendered “is almost a dismantling, a tearing up, of the Biblical basis of gender, of God’s original vision for mankind to be identified as male and female.
“Our ultimate goal,” he said, “would be for them to accept the physiology and biology they were born with.”
Scarborough said she tried for years to reject her female identity. She attended conservative evangelical churches for more than two decades. She was openly transgendered at one of them and, on the advice of the pastor, married a woman and tried to suppress her female identity.
But she couldn’t change, no matter how hard she tried.
“I realized I was living a lie,” she said. “I realized I couldn’t go on like this.”
But her faith in God was never broken.
“I knew God does not make mistakes,” Scarborough said. “I see myself as a miracle of God.”

Here's the link to the article:
http://www.pe.com/local-news/riverside-county/riverside/riverside-headlines-index/20111120-riverside-commemorating-victims-of-anti-transgender-violence.ece
Hugs,
Eva-Genevieve!
Posted by Eva-Genevieve! at 6:28 AM No comments: 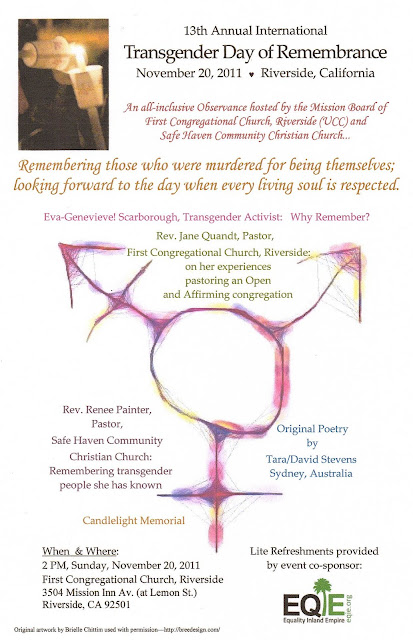 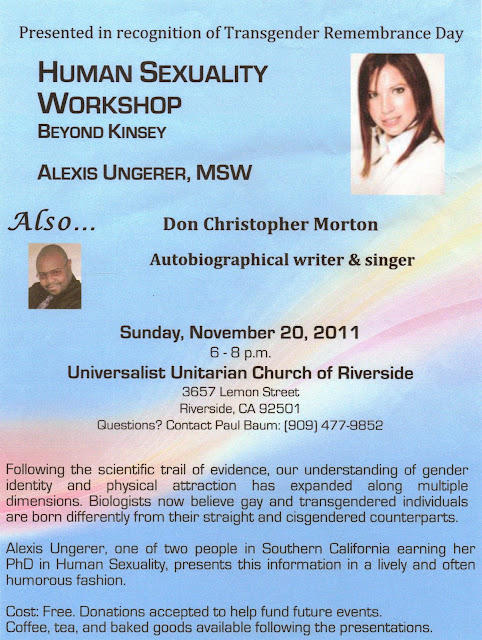